Quickly Weekly Wrap Up: Seriously, it's not long! 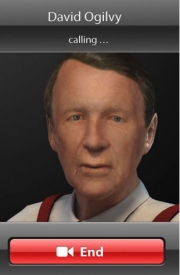 You ever sit there and wonder how good your idea is for your company or brand but just don’t have anyone to bounce that idea off of? Look no further than the iOgilvy application available for the iPhone. It is based off of the ad legend David Ogilvy. Thanks to modern technology, you can pitch your ideas to the man himself and see how they measure up…well, sort of. While it’s not the actual David Ogilvy, it’s a neat app and supposedly will give you an honest opinion of your idea. Now if only there was a Gordon Ramsey application that’d critique you on your cooking.

In more frightening news, advertisers for major brands are stepping it up to a whole new level or a horror new level if I may. What is happening is that brands are now diving deeper into the psychological aspect of advertising (if there already wasn’t enough of that already) and adding a dose of scariness to their advertisements to make a longer lasting brand impression. Watch the video below to see what we’re talking about and see if you can guess what brand it is before the end…

See what I’m talking about? Now do you remember the last Dirt-Devil commercial or do you even remember Dirt-Devil!? I didn’t think so…but now you will. It’s simple yet complex advertisements such as these that gave rise to the phrase ‘Fear Branding’. A study was done in 2010 concerning such type of advertising which gave interesting results. Woolite has touched upon the same idea in their own commercial, which was directed by Rob Zombie.

Google+ has certain built up a lot of buzz for itself in the past week. We tried hard to abstain from posting anything on Google+ this week but it proved very difficult, as it’s everywhere! One article though shed some good light on the emerging social network that we think you should definitely take in to consideration. Google has revealed that it is working on a Google+ experience for businesses and is asking brands not to create Google+ profiles just yet. So don’t get antsy and feel like you need to triple-dip your company (you should already have a Twitter and Facebook account, if not…shame on you).